As an artist, my main interest is in the relationship between color and light. In the Aurora Series, I try to capture the extraordinary clarity and range of color in the dawn sky. Recently I have also begun to explore reflections of light and color in the rainy streets of New York at night.

I was born in Scotland and from the age of five attended art classes for children at the Glasgow School of Art. Spending time in Charles Rennie MacIntosh’s architectural masterpiece, surrounded by art and artists, had a profound influence on me. I continued to study Art at Scholarship Level at school after moving to London at the age of thirteen.

After high school, I attended London University for two years and then transferred to Harvard. After graduating I established my own business buying and selling art and antiques, though I continued to draw and paint in my spare time. About fifteen years ago it became clear to me that painting was becoming my major interest. After taking some refresher courses, I closed my business and concentrated on painting.

As an artist, my main interest is in the relationship between color and light. In 2010, after discovering the extraordinary clarity and range of color in the early dawn sky, I began the Aurora Series, which I continue to work on today. In these paintings I try to capture that clarity, not photographically, but by abstracting the essence of the sky’s light in the short period of time before the sun rises over the horizon. More recently I have begun to explore the reflections of light and color in the rainy streets of New York at night.

I have exhibited locally and at the Cornell Club in New York City, and I have sold paintings in both America and England.

The driveway to my studio is on the left side of Rte. 96 going north from downtown Ithaca, almost directly opposite Dubois Road. (The property next door is Indian Creek Fruit Farm, which has a large sign and is difficult to miss. You can also turn around there if you miss my driveway.) The driveway curves, so you will not see the studio from the road. As you reach the top of the driveway, the entrance to my studio is on your left. 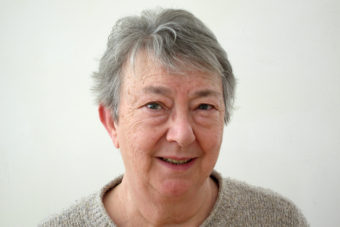